A Green New Deal is fiscally responsible. Climate inaction is not 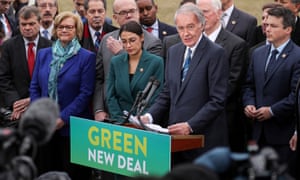 In the coming days, the Senate majority leader, Mitch McConnell, plans to hold a vote on the Green New Deal resolution recently introduced by congresswoman Alexandria Ocasio-Cortez (D-NY) and Senator Edward Markey (D-MA). Despite polls showing broad bipartisan support for a Green New Deal, McConnell hopes his ploy will divide Democrats and boost the GOP talking point that the plan is fiscally irresponsible.

While McConnell and other critics seem to think that they can defeat the Green New Deal by repeating a tired mantra – “we can’t afford to do it” – the real question is: how can we afford not to? Without bold action to tackle climate change, toxic pollution and economic and racial inequity, our society will only see rising fiscal burdens. A Green New Deal would not only help us avoid mounting costs – it also would stimulate broad-based demand in the economy by investing in real drivers of economic prosperity: workers and communities. That’s in stark contrast to the GOP’s expensive recent policy priority – the nearly $2tn tax cuts of 2018 – which did little more than enrich stateless mega-corporations and the wealthiest investors.

A Green New Deal is first and foremost about justice – prioritizing working people, communities of color and others who bear the brunt of stagnant wages, polluted air and water, and climate impacts. It’s about acting at the speed and scale that equity and science demand. But if opponents want to debate the plan’s straight economic merits, Green New Deal backers should welcome the opportunity. The plan is also about fiscal foresight.

While some people talk about the costs of climate change as far-off hypotheticals, there’s growing evidence that costs are already here. On 6 February, the National Oceanic and Atmospheric Administration and NASA released findings that climate change impacts in 2018 directly resulted in 247 deaths and $91bn in damages. The longer-term fiscal implications are also becoming clearer. In November, 13 US federal agencies reported that, under current emissions trajectories, the US economy would bear more than $500bn per year in costs due to labor and agricultural losses, sea level rise and extreme weather impacts by the end of the century. This annual half-trillion-dollar burden didn’t account for many unpredictable second-order costs of climate change, like the implications of mass forced migrations driven by water scarcity and flooding. These are risks that the Pentagon has been highlighting for a decade.

A Green New Deal would help to seriously reduce climate pollution and cut these long-term liabilities, whether by supporting a transition to 100% clean energy, expanding access to clean public transportation, or spurring innovation in clean manufacturing. While some impacts of climate change are now inevitable, a Green New Deal also would help communities mitigate costly damage by investing in urban green spaces to prevent flooding, restoring wetlands to buffer hurricanes, protecting houses from forest fires, and shielding coastlines from sea level rise. In addition to supporting community resilience, this would reduce long-run costs for the federal government and for the states and municipalities that tend to shoulder the biggest burdens in emergencies.

Of course, a Green New Deal isn’t just about managing risks – it’s also about creating economic opportunities. The plan would create millions of jobs with family-sustaining wages for workers whose inflation-adjusted pay hasn’t budged since the 1970s. Whether replacing lead pipes, weatherizing homes, manufacturing components for light rail, or rehabilitating damaged ecosystems, a Green New Deal would put money in the pockets of the workers who are most impacted by rising economic inequality. Given that low-income workers tend to spend more of their available money than the wealthy, this targeted effort to boost working class wages would strengthen growth, reduce the income gap, and ultimately improve the nation’s economic fundamentals.

Even people who deny the evidence that inequality is slowing economic growth must admit that a Green New Deal would address other long-term liabilities. The plan would invest in the kinds of infrastructure upgrades that nearly everyone agrees are needed – not only to create good jobs, slash pollution and build community resilience, but also to support economic growth. Renewal of our energy, water and transportation infrastructure is long overdue – and today’s low borrowing costs make the investment all the more prudent. Looking to the long-term, a Green New Deal also would spur innovation and growth in advanced manufacturing through policies like “Buy Clean” that direct tax dollars for public projects to the most efficient, least polluting forms of production.

Contrast these forward-looking investments with a spending deal that many opponents of a Green New Deal so ardently championed: the Republican tax cuts of 2018. While backers of the GOP tax package billed it as a vision of fiscal responsibility – a program that would “pay for itself” according to the treasury secretary, Steve Mnuchin – the nonpartisan Congressional Budget Office estimates the deal will now add $1.9tn to the national debt over a decade.

And it’s not as if this money has gone toward solving real challenges. Much of the large sum has gone to share buybacks that serve one purpose: lining the pockets of the richest investors. Recent economic analysis show that the short-term stimulus effect of the tax cuts has now been mostly exhausted.

Some in the GOP seem to think that fiscal responsibility means spending billions to prop up the financial interests of billionaires and corporate polluters. A Green New Deal offers a better definition: laying the groundwork for a more vibrant and equitable economy that sustains the communities and physical resources on which our society is built.

Mitch McConnell and fossil fuel lobbyists are hiding behind flimsy talking points to justify the costly path of continued inaction on climate and inequality. Backers of a Green New Deal should stand up to this hypocrisy and reclaim the mantle of real social and economic responsibility.

Source: A Green New Deal is fiscally responsible. Climate inaction is not

Join host James Ehlers and his guests for stories and perspective from the woods and waters, our farms, and our backyards as they help us work through the issues of living with the land in 21st Century Vermont. They will address stewardship and conservation issues and their ramifications for public policy and the economy in the Green Mountain State (and around the country)  through our outdoor pursuits and our passion for preserving our heritage. Join us as we take a look at Vermont's people, her places, and the possibilities! Enjoy! Remember, though, chips are for kindlin', not for shoulders. CLICK HERE to tune in live, every Wednesday at 2pm. Want to talk to James and/or his guests on the show? Call 802 - 335 - 2565 or email [email protected]

Michael Cohen’s explosive opening statement: Trump is a “racist” and a “con man”

A foreign disinformation campaign is targeting Democrats ahead of 2020