A viral video of New York Representative Alexandria Ocasio-Cortez using a “Corruption Game” to highlight the need for campaign finance reform during a House Oversight Committee hearing last Wednesday has become the most viewed video of any politician in Twitter history, according to a video analytics firm.

On Monday, NowThis News Deputy Editor Jon Laurence tweeted out that a video of the exchange shared by the news platform on Twitter had become the most viewed video of any politician on Twitter “ever.”

Laurence noted that the video, which had received tens of millions of views and 118,400 likes and 46,450 retweets on the social media platform as of Monday, had also risen to become the 41st most viewed Twitter video of all time.

✔@jonlaurence
This is now the most viewed video of any politician on Twitter, ever, as well as #41 in the most viewed Twitter videos of all time
NowThis
✔@nowthisnews
‘We have a system that is fundamentally broken.’ — Rep. @AOC is explaining just how f*cked campaign finance laws really are 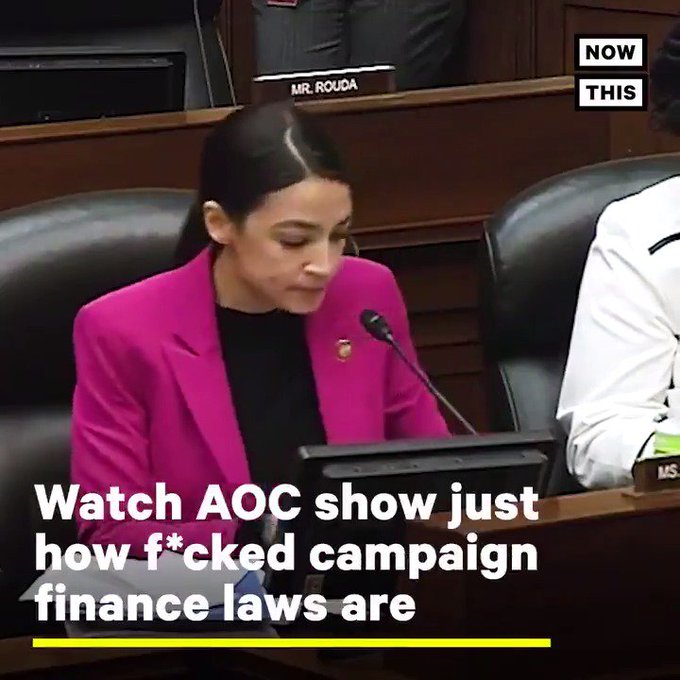 Cassillo said that whether Trump’s video should be included in the political ranking “depends on whether you consider Trump’s ‘Fake News Network’ wrestling meme…a video of a politician or not.”

“The video was shared directly from Trump’s feed, but only depicts the back of his head and is more about ‘beating up’ CNN. So certainly not clear-cut,” Cassillo said. It is also worth noting that the undoctored footage was taken in 2007, a decade before Trump became president.

As of Wednesday, Trump’s “Fake News Network” wrestling meme had garnered 39.1 million views, while NowThis’s video of Ocasio-Cortez’s “corruption game” had attracted 37.9 million views, suggesting it was on course to hit the top spot. Cassillo said engagement for the video published by NowThis continues to be on the rise, ascending to the No. 38 spot in most-viewed Twitter videos of all time within days.

In a statement to Newsweek, Twitter spokesperson Nicholas Pacilio said that he could not confirm the stats because the social media site did not provide NowThis with the data.

In her “corruption game,” Ocasio-Cortez launched into a “lightning round” of questions for a panel of ethics experts in a bid to demonstrate just how easy it is for corrupt lawmakers—and even, hypothetically, the president of the U.S.—to avoid accountability under current government ethics laws.

In rapid succession, the 29-year-old lawmaker was able to highlight how a political “bad guy” would be able to enrich themselves and advance their interests “even if that means putting [their] interests ahead of the American people.” Her examples ranged from taking “special interest dark money” from corporate PACs to fund a campaign to using hush money payments to make potential scandals disappear and writing laws that benefit donors and then buying stocks in their companies for personal financial gain.

After confirming that all of the above would be possible, Ocasio-Cortez asked whether “any elements” of her questioning could be applied “to our current government and our current public servants right now?”

“So,” Ocasio-Cortez said, in summary: “We have a system that is fundamentally broken. We have these influences existing in this body, which means that these influences are here, in this committee, shaping the questions that are being asked of you all right now. Would you say that that’s correct?”

“Yes,” one expert, Walter Michael Shaub Jr., an American attorney specializing in government ethics who previously served as the director of the U.S. Office of Government Ethics, responded.

“So, I’m being held, and every person in this body is being held, to a higher ethical standard than the president of the United States,” Ocasio-Cortez asked.

“That’s right,” Shaub confirmed. “Because there are some committee, ethics committee rules that apply to you.”

“And it’s already super legal, as we’ve seen, for me to be a pretty bad guy. So, it’s even easier for the president of the United States to be one, I would assume,” Ocasio-Cortez said.

The New York politician’s “lightning round” quickly went viral after it was posted to social media.

According to New York Times chief Metro political correspondent Shane Goldmacher, it had topped 21 million views in a single day.

To put that into perspective, Goldmacher said in a tweet earlier this month, the video managed to surpass an “insanely viral” video also published by NowThis of Texas politician Beto O’Rourke delivering an impassioned speech praising NFL players choosing to kneel during the national anthem, which, to date, has 19.9 million views on Twitter in total.

U.S. Representative-elect Alexandria Ocasio-Cortez participates in drawing a lottery number for her new office on Capitol Hill, on November 30, 2018. A video of Ocasio-Cortez’s “Corruption Game” has reportedly become the most-watched video of any politician ever.BRENDAN SMIALOWSKI/AFP/GETTY

This article has been updated with statements from NowThis, Tubular Labs and Twitter.

Source: Alexandria Ocasio-Cortez’s ‘Corruption Game’ Speech Is Now the Most Viewed Twitter Video of Any Politician

AOC, Sanders, and Warren Are the Real Centrists Because They Speak for Most Americans

Michael Cohen: “I Fear That If He Loses The Election In 2020 There Will Never Be A Peaceful Transition Of Power”