On Thursday morning, Attorney General William Barr appeared on national television and told the public that special counsel Robert Mueller’s report concluded that as many as ten discrete episodes of obstruction of justice involving the president may have occurred in the course of the special counsel office’s independent investigation. He similarly acknowledged that there was a massive, coordinated effort by the Russian government to interfere with the 2016 election in the service of getting President Donald Trump elected.

Barr provided the president, and himself, some wiggle room, acknowledging that he and his deputy, Rod Rosenstein, did not ultimately agree with the legal theories advanced by the Mueller team in support of their obstruction claims but, leaving these disagreements aside, concluded that there was insufficient evidence nonetheless to bring charges. Similarly, Barr clarified that no member of Trump’s campaign participated in the illegal dissemination of information gained by Russian sources — leaving the door open to the possibility that persons outside the campaign may have participated in this fashion.

There remains, in other words, ample terrain for curious journalists to till. So what was the immediate reaction by CNN as Barr strode away from the podium?

Despite the fact that the Justice Department telegraphed their intention to run interference on behalf of the White House, mainstream media sources somehow managed to still buy the spin that Barr was selling at face value. Blitzer didn’t even wait for Barr to step off the stage before declaring “a complete vindication of the president.” Awkwardly, Blitzer contradicted himself moments later when he pointed out that nobody has actually seen the Mueller report yet.

Blitzer’s CNN colleague Jake Tapper was far more pragmatic about what they had just witnessed, noting that Barr repeatedly went out of his way to claim — delicately, and with a fair amount of couching language — there was no evidence pointing to collusion.

“He made the point several times which will no doubt please President Trump,” said Tapper. “I guess the question is now, what does the report say? And how well does that line up with what the attorney general just said?”

CNN was hardly the only news outlet to parrot the White House’s talking points to their audience. Shortly after Barr concluded his political address, the New York Times trumpeted Barr’s “no collusion” comments atop its homepage, without so much as a mention of the bright line that Barr had drawn around the report’s conclusion about potential obstruction of justice violations.

In contrast, Bloomberg and the Washington Post were far more credulous about Barr’s remarks, instead highlighting the obstruction claims and noting that the Department of Justice disagreed with Mueller’s legal framework for potential criminal charges. 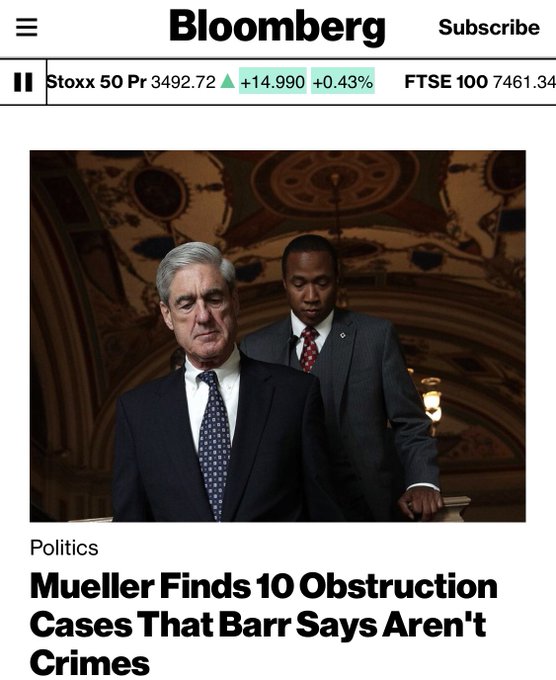 Perhaps sensing their framework was both problematic and anomalous, the Times quickly updated their homepage to note that Barr’s press conference was a preemption of the actual Mueller report, which is expected to be released later today, and makes mention of the 10 instances of possible obstruction.

Naturally, Fox News and other publications aligned with the White House were happy to emphasize Barr’s supposed exoneration of the Trump campaign. For the discerning public wondering what to make of the Mueller report, the advice is simple: Wait until the report itself is actually made public and thoroughly reviewed before drawing any conclusions.

Join host James Ehlers and his guests for stories and perspective from the woods and waters, our farms, and our backyards as they help us work through the issues of living with the land in 21st Century Vermont. They will address stewardship and conservation issues and their ramifications for public policy and the economy in the Green Mountain State (and around the country)  through our outdoor pursuits and our passion for preserving our heritage. Join us as we take a look at Vermont's people, her places, and the possibilities! Enjoy! Remember, though, chips are for kindlin', not for shoulders. CLICK HERE to tune in live, every Wednesday at 2pm. Want to talk to James and/or his guests on the show? Call 802 - 335 - 2565 or email ournaturevt@gmail.com